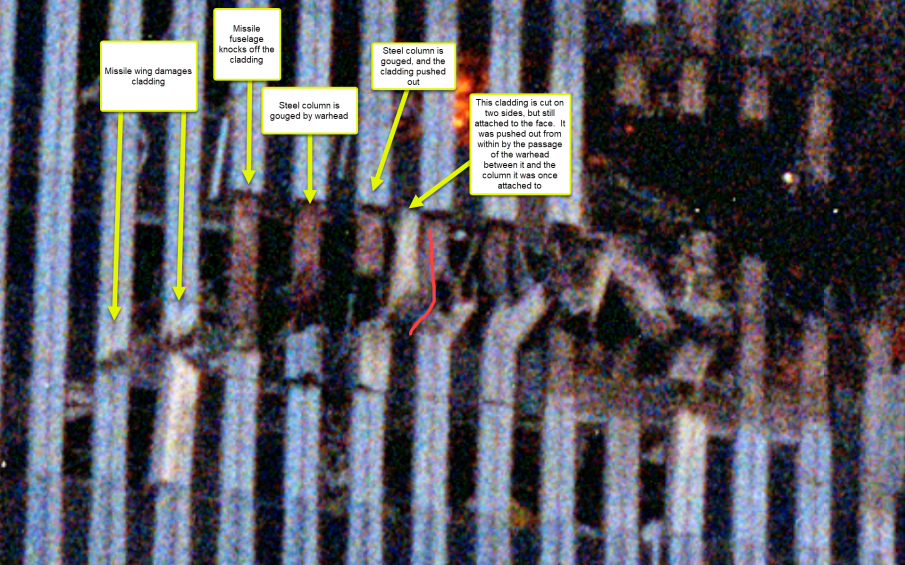 Most of the photographs in the public domain of the holes in the Twin Towers are of the North Tower of the WTC. There are very few of the South Tower hole, and those that are available are usually screen captures from videos. I recently discovered one such screen capture which shows more clearly than ever that missiles did indeed cut at least some of the columns in the twin towers.

For almost ten years now I’ve been hopping up and down and waving my arms trying to get truthers to look at the evidence of the lateral impacts of small projectiles – cruise missiles, in other words. What leads me to that conclusion is the lightly damaged aluminum sheeting and the progressively worse damaged steel columns visible on the left sides of both of the holes in the towers. I have often used this image to show that in those first nine columns from the left can be seen almost identical damage.

And this one, to demonstrate that in a head on impact, as shown on television, the wings would impact the towers more or less like so:

Clearly something that was at once not very dense and not very big struck from the side, as evidenced by the lightly damaged aluminum sheeting seen at the far left of both holes, but it became much bigger and much more dense as it moved to the right when it gouged, and sharply bent the steel to the right. A missile can explain this damage.

I’ve always maintained that this pinched cladding alone is evidence of a missile impact.

I also had some animations created to explain it:

But that was before this screen grab from an as yet unknown video that shows the South Tower hole from a center left perspective. Ironically enough I think it comes from Judy Wood. How could she have missed this evidence?

This is the original shot (which appears to have been scrubbed from the web):

Notice this piece of aluminum sheeting is still upright, but bent outward.

The columns were gouged, and on the fifth column from the left, the missile warhead passed through the column, but behind the cladding, which can be seen bent out by something circular, striking at an oblique trajectory of somewhere around 10 degrees from parallel.

This is evidence that again proves no plane could have possibly hit head-on and gouged-out three sides of a steel column, but failed to cut through the aluminum sheeting that covered those three sides.

Missiles dunnit. No doubt about it.

I am working on a video on this as well.