How the Shanksville Crater was made

Two cruise missiles striking in opposite directions at trajectories of about 10 degrees caused the gash at Shanksville. The first one struck creating a gash but the penetrating warhead did not detonate – it was embedded in the ground. The second one struck from the opposite direction and detonated a split second later, creating the center hole. 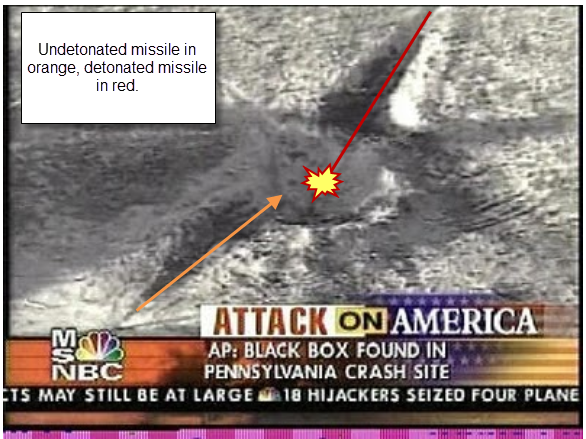 Explained here (YouTube censored this video for “hate speech,” so it was moved to Vimeo:

Christopher Bollyn was wrong when he stated the gash preexisted 9/11:

There are a couple myths that were likely spread to create confusion, but aren’t true:

No, the gash was not there as was proved by the USGS photos: 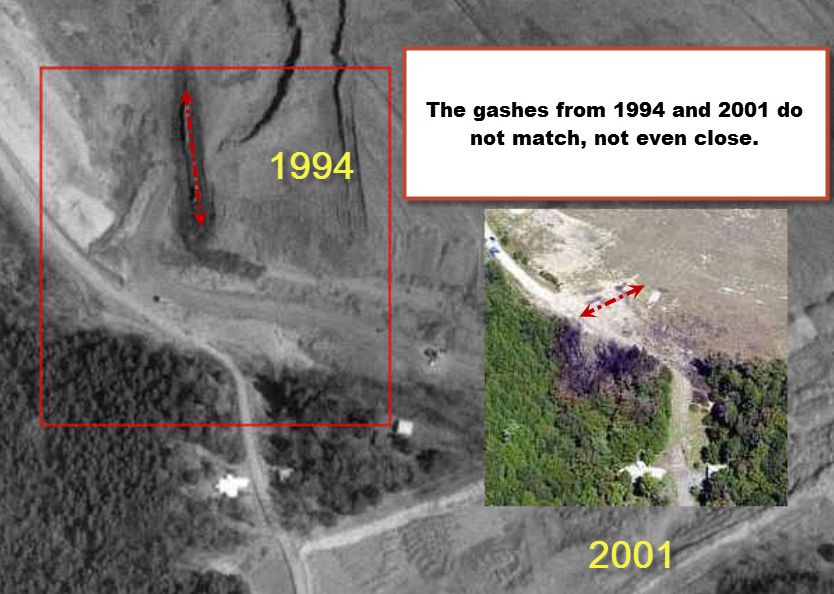 Google Earth used the same image in their 1994 “Snapshot” – but it STILL is not the same gash.  Folks just have to get over it: 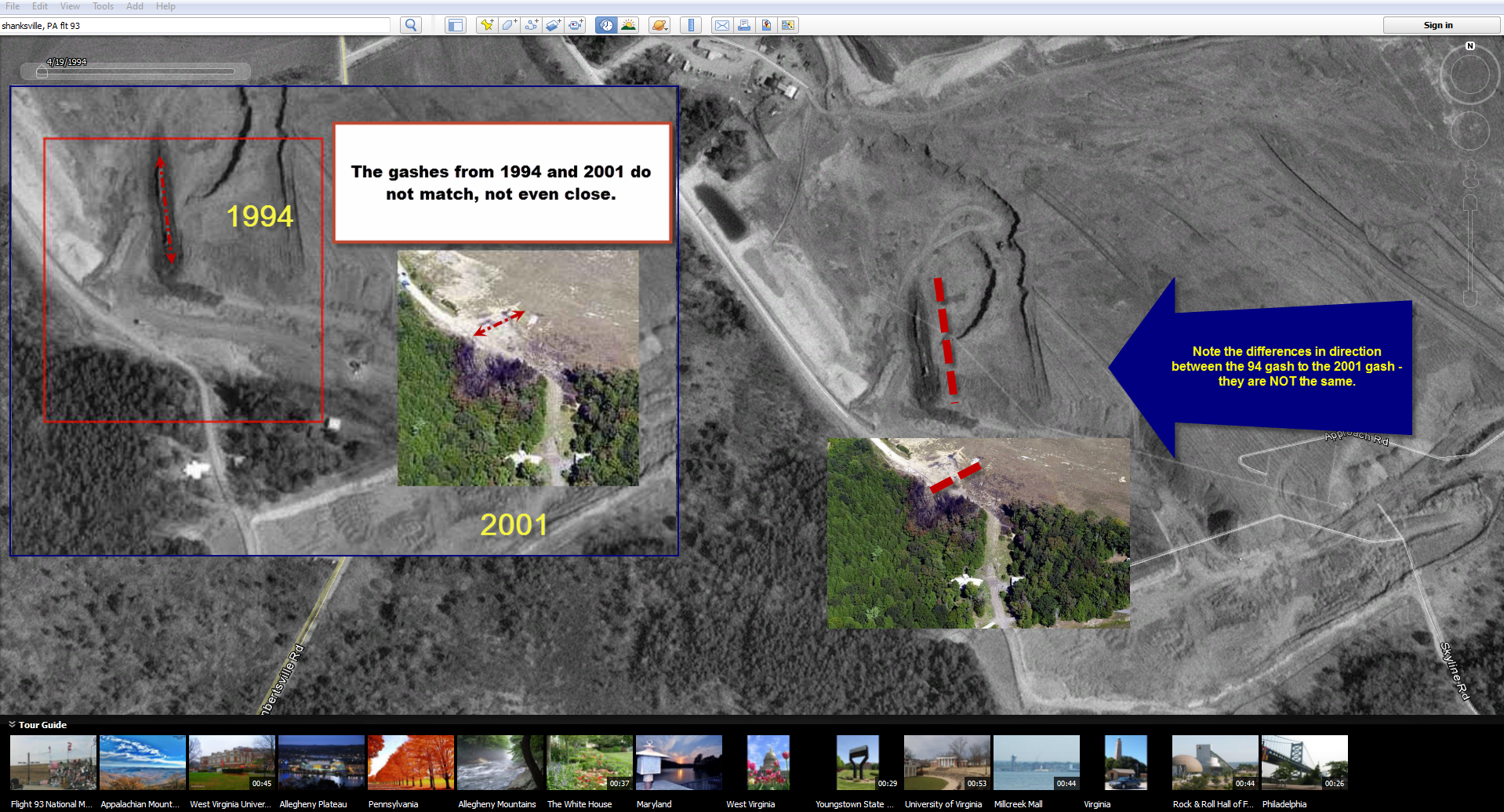 Because of this image people believe there is grass growing in the ditch, indicating it had been there for quite some time, but this is also not true. 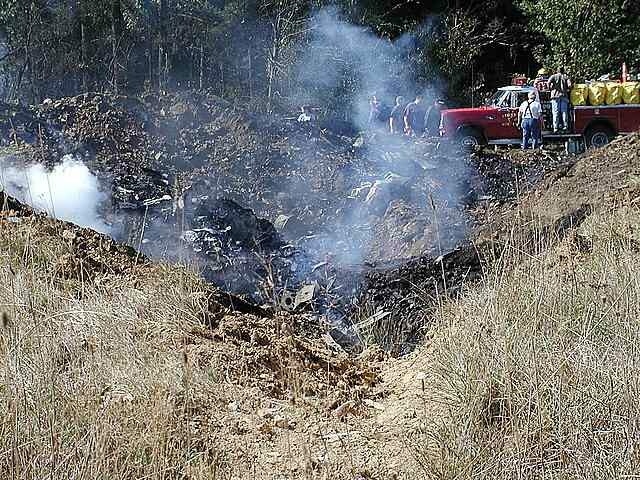 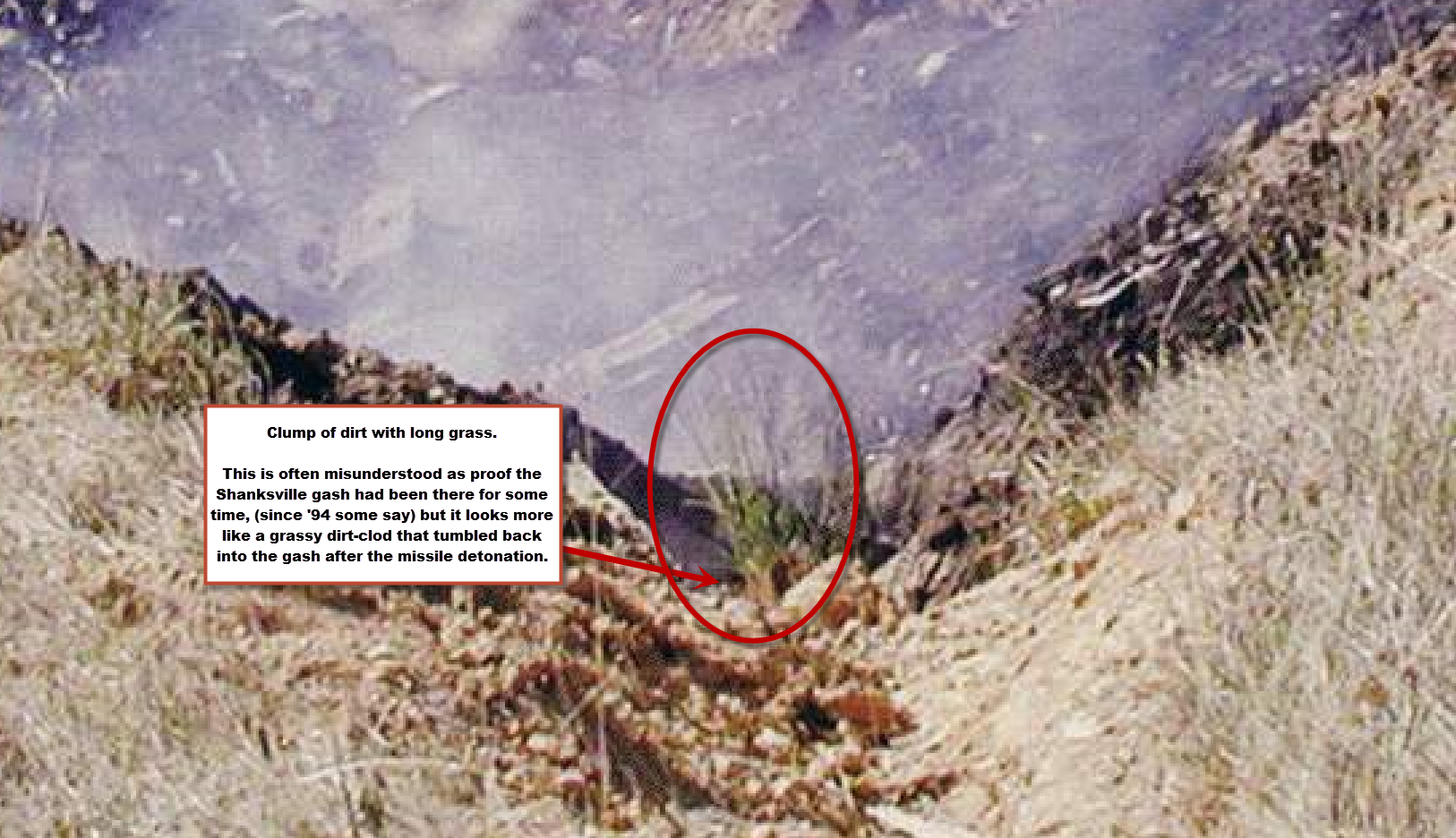 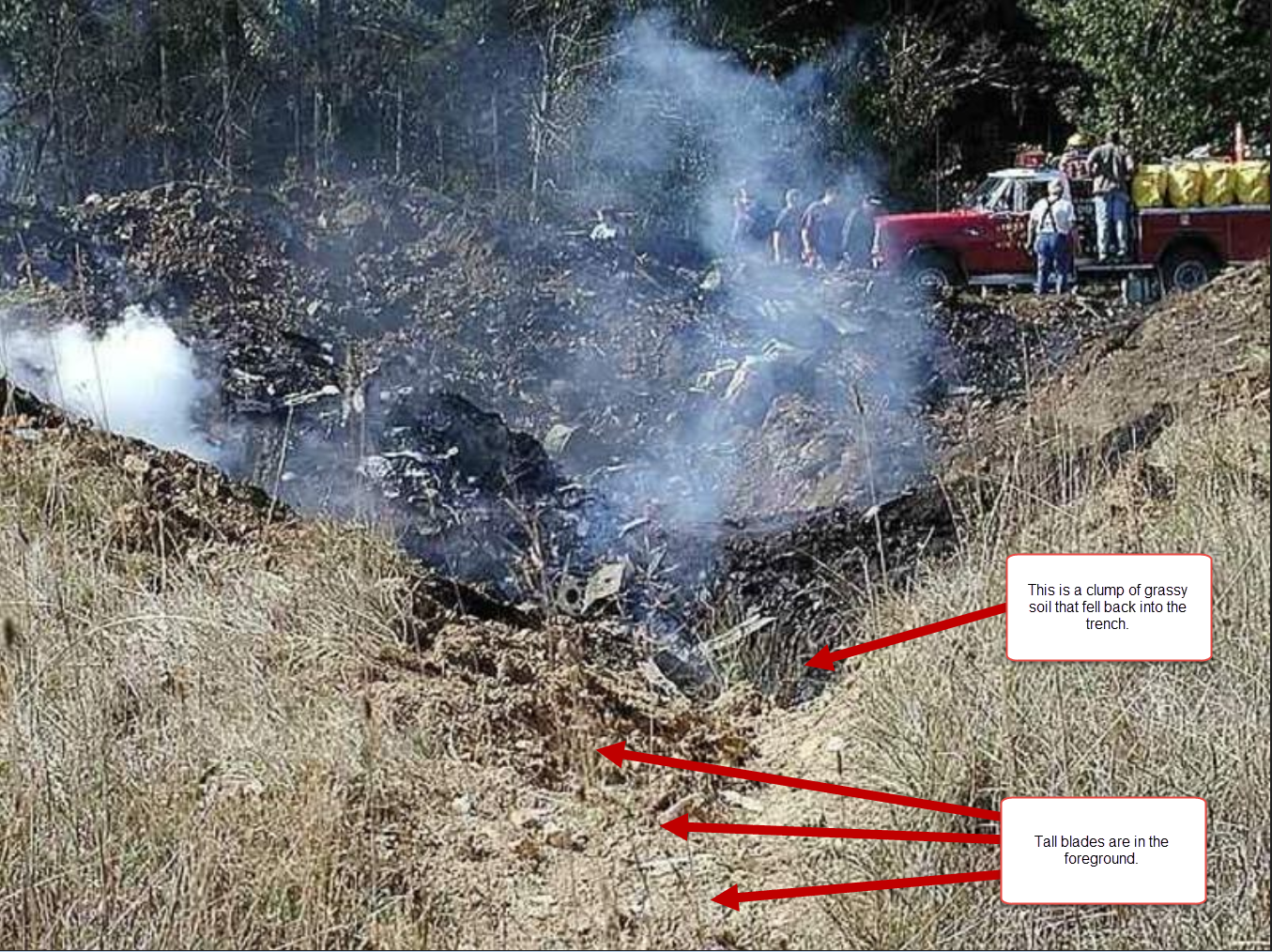 Also note that the grass around the edge of the trench appears to be growing from inside the trench too,  but this is due to the missile undermining the surface sod.  It can be seen that the nap of the sod that rolls over the edge also follows the contour of the gash.  Had it been there for any length of time it would follow the sun. 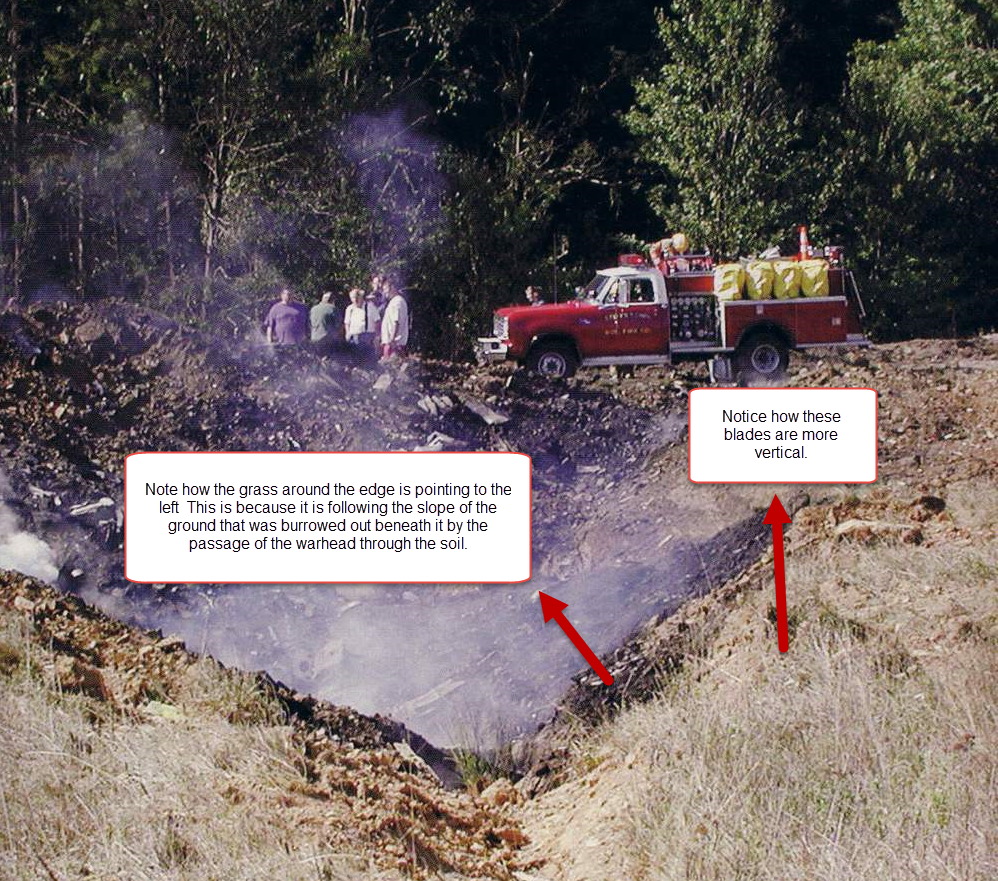 The warhead would push the soil forward in the direction of travel, and out to the sides and above in a cone-shape.  At first it would cut through the sod, but once it burrowed deeply enough it would undermine the soil around the edges.  After the missile bored out the soil beneath the sod, the sod flopped back down on the soil beneath it making it appear to be growing from inside the ditch. 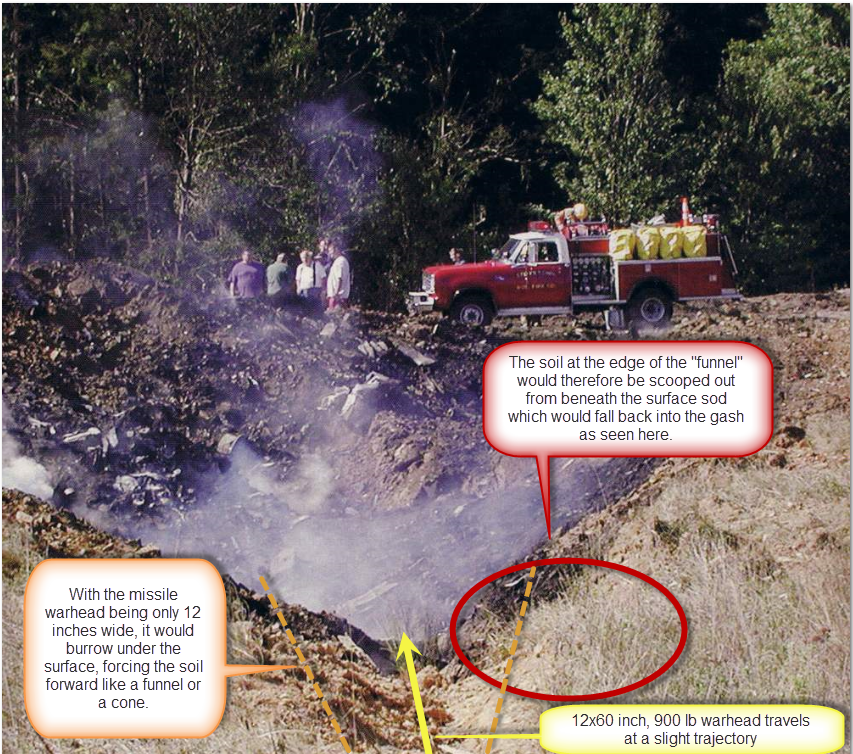 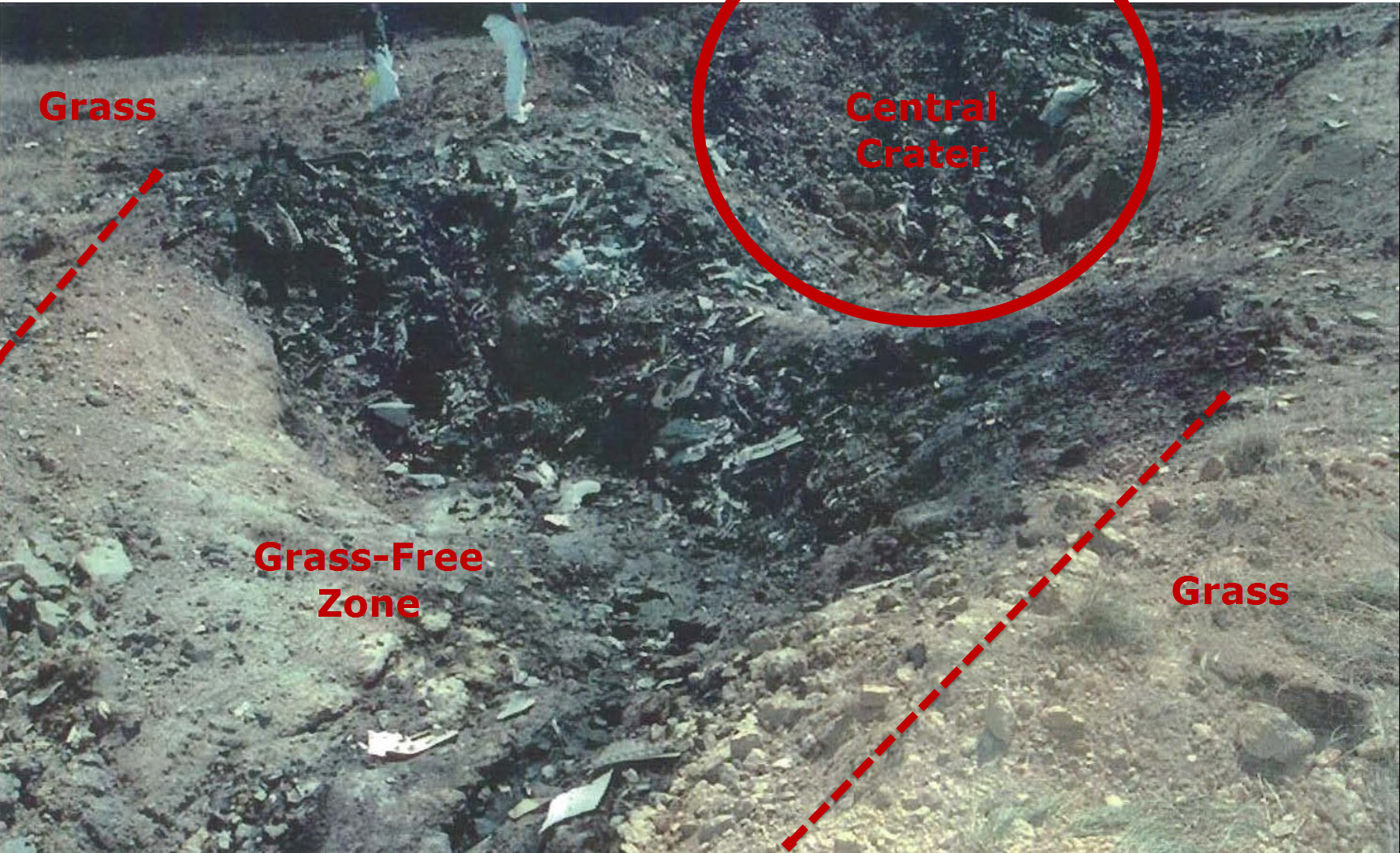 Note the images below – see how one tree is snapped lengthwise?  Something detonated above the trees, splitting one right down the middle. 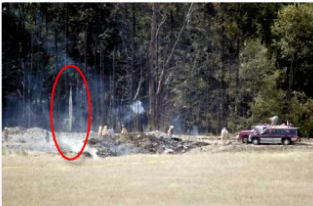 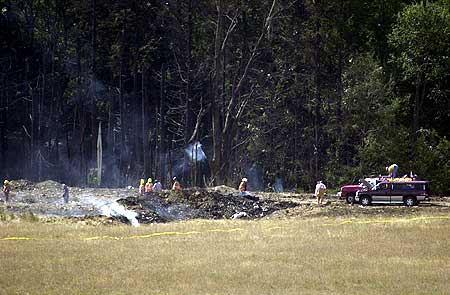 Also notice the bouncing smoke plume, is it in the crater or outside of the crater… 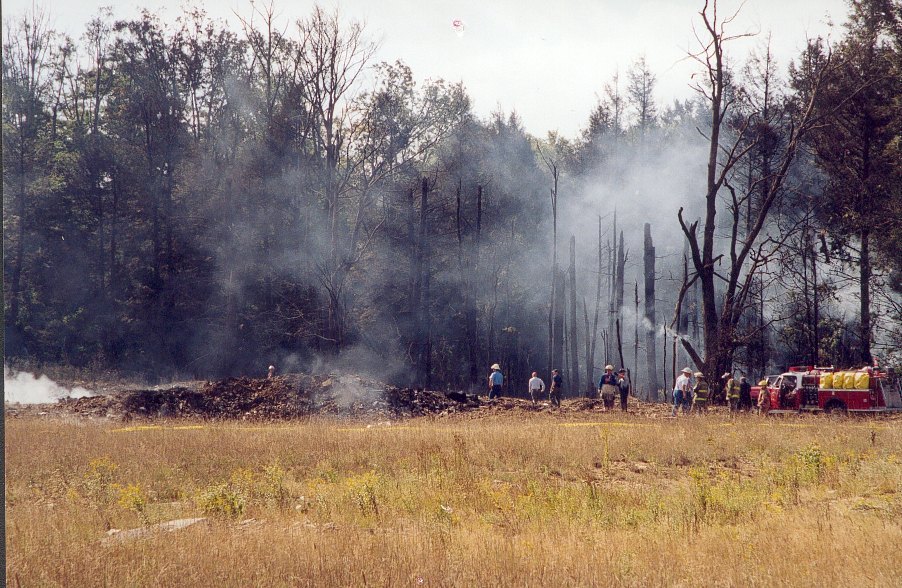 Some people claim the trees would prevent the missile from being able to gain the right angle of attack, but I disagree.  I used the NASA images of craters made by a NASA test center at 10 degree trajectories as a starting point for the hypothesis.

If it turns out the trajectory of the missile that struck from above the trees was steeper, so be it.  With highly maneuverable missiles armed with asymmetrical warheads the trees would not be an issue.  Below are some patents of asymmetrical missile warheads:

The penetrator of this invention is delivered to a preselected site either by aircraft or rocket launchers or the like and after entering the soil or earth, the warhead section is separated from the nose section by an initial separating charge. The wedge-shaped nose section follows a trajectory which limits its depth of burial and brings it to rest in a desired position where it may be detonated at some later time.

It is therefore an object of this invention to provide a penetrator which has a controlled depth of burial.

It is a further object of this invention to provide a controlled depth of burial penetrator which contains therein a warhead section for detonation at a preselected time or situation.

According to further features in preferred embodiments of the invention described below, the nose section includes a portion which projects forward such that during impact of the missile with a target, the portion of the nose is the first to make contact with the target.
The warhead is intended for use in a roll-stabilized, position-controlled, guided missile or projectile designed to penetrate a hardened concrete target or other highly resistant targets.
Roll-stabilization relates to the keeping of the angular position of the missile about its axis roughly constant. Position control relates to ensuring that the missile is oriented so that the top portion is pointing up while the bottom portion is pointing down, i.e., to prevent the missile from flying
with the wrong roll angle.
http://www.google.com/patents/WO1997007379A2?cl=en 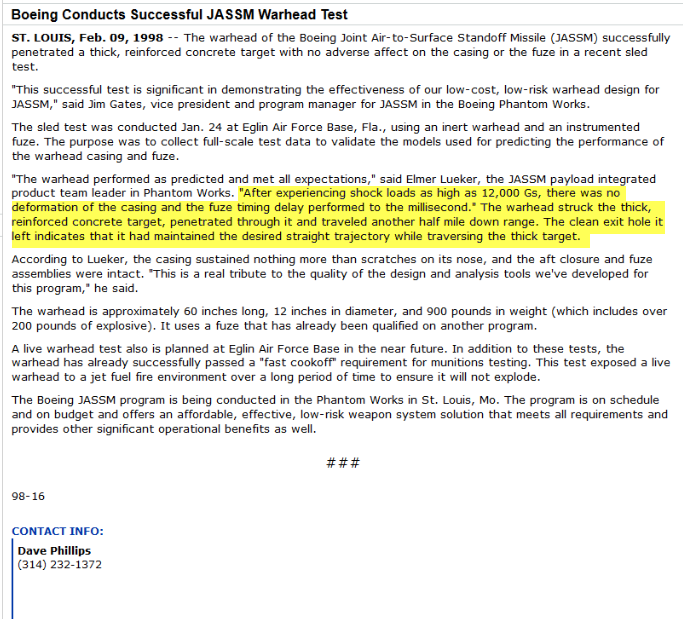 My videos go through cycles like the below – whenever they start to become popular, the view counts plummet.  In the image you’ll see that ‘likes,’ comments, ‘shares’ and adds to playlists increased sharply just before all traffic fell to just about zero.  This particular video has almost 10 times the likes as dislikes, so I doubt that the recent plummet in view counts is organic.  It is hard not to conclude that YouTube is fiddling with these figures. 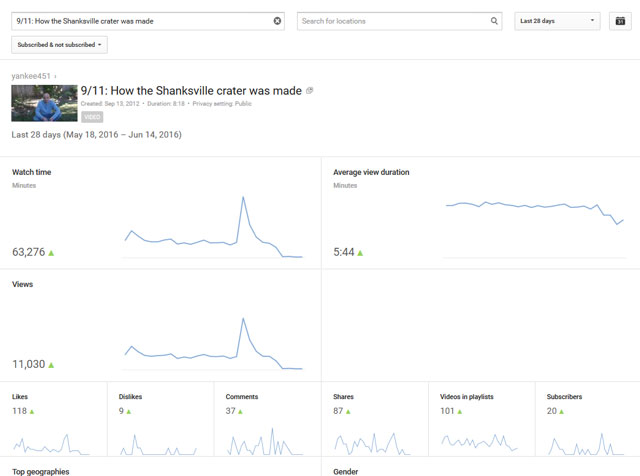 Thanks for your feedback.

Shaolin Abbot:
The enemy has only images and illusions behind which he hides his true motives. Destroy the image and you will break the enemy.

The warhead described in the documents you’re presenting is a hot suspect. It may very well have produced the crater and the gash. Note it says that the warhead (which is behind the nose) is separated by an initial charge and buried for later detonation while the nose follows another trajectory, less penetrating, possibly bouncing off the ground again, so the nose may produce the entire gash, both sides, and hit and split the tree that you’re highlighting, possibly detonating in the process. Quoting the passage I’m referring to for clarity:

“The penetrator of this invention is delivered to a preselected site either by aircraft or rocket launchers or the like and after entering the soil or earth, the warhead section is separated from the nose section by an initial separating charge. The wedge-shaped nose section follows a trajectory which limits its depth of burial and brings it to rest in a desired position where it may be detonated at some later time.”

As far as I can see on the photo, there are no burn marks visible on the split tree, so I’d say it suffered kinetic action, a direct hit on the trunk, rather than the hot gases of a detonation. But I cannot establish whether the tree is aligned with the gash. More evidence needed.

Why two missiles striking from opposite directions, which would have had to occur with precision of about a meter or two? One missile is enough to account for the damage pattern (both sides of the gash, crater, tree). It might also have been a simple unguided bomb equipped with the patented warhead dropped by a jet flying low and fast to account for the kinetic energy the warhead needs to penetrate the target. Not saying it is more likely than a missile, but it seems a technical possibility.

All in all, this is a great find and there’s more to the hole then I suspected, because there’s something that meets the eye (gash and tree) that needs explaining.

I even have this funny idea that people in the military or weapons industry who saw the gashed craters their warhead produced may have jokingly said among themselves “Hmm … doesn’t it look an awful lot like a plane dove in right here? Maybe good enough to fool a fellow or two!”

Quote from your Feb 15, 2018 page on Taboo Truths: “Obviously the spooks are nowhere near as all powerful as they’d like us to believe, but apparently they don’t worry about their incompetent and stupid mistakes being noticed by us, because we are incompetent and stupid too, and they know we’ll believe authority by virtue of their authority and nothing else.”

You nailed it – this is the way it works. Case in point: the current virus hoax.