The NYPD and Molten Concrete

Corruption in big-city police departments is legendary.  Countless movies about dirty cops litter the video shelves; movies like Serpico, Internal Affairs, and the Godfather depict corruption everywhere.  Everyone’s aware of Philadelphia PD corruption, of the LAPD and Rodney King, etc., etc.  To a lesser known extent, but likely just as corrupt, come other big city departments, like the fire departments and social services, or the mayor’s offices.  Influence peddling (read: graft, bribery) in local and national governments is commonplace, but we common folk prefer not to talk about it, or tell ourselves the good guys win in the end.  It’s a happy fantasy.

We’ve all heard the stories about the brave FDNY and the rivers of molten steel.  The fire department is presented as hero-victims of 9/11 and is therefore beyond suspicion and reproach, as is their claim of molten steel.  Second only to the FDNY on the sympathy scale is the NYPD, but what many people don’t know is not only was steel in the sky turned molten by kerosene on 9/11, but according to the NYPD, it also melted concrete a thousand feet below and not only that but after it cooled, it solidified back into concrete, encasing firearms therein.

Melted concrete; why would they say that?  Are they trying to give the impression that if the fires were so intense they could melt concrete then there’s no doubt they would melt steel?  Since I look at everything as possible propaganda, that’s the Pachyderm-sized take-home lesson I have sitting in my living room, but I’m a cynic so let’s examine this claim to first see if it’s even possible.

At the time of 911, Bernie Kerik was NYPD commissioner, and from there he went off to be the “Interim Minister of Interior – coalition Provisional Authority of Iraq” – he was allegedly not pilfering war-funds (you know, those pallets of cash that simply disappeared as soon as they arrived), but training locals to be good, honest cops.  Unless I missed a recent headline, Kerik is currently doing time in a federal prison for other charges, but it gives a good idea of the kind of character that was in charge on 911.

“On October 20, 2009, Kerik’s bail was revoked after he allegedly disclosed information which was under seal.[47] He was remanded to the Westchester County Department of Corrections jail in Valhalla, New York, which has a section reserved for federal prisoners.[5] Kerik was referred to as “a toxic combination of self-minded focus and arrogance” by Judge Stephen Robinson on October 20, 2009.[48]

On November 5, 2009, Kerik pled guilty to tax fraud and lying to White House officials.[6] The prosecution and defense recommended that Judge Robinson sentence Mr. Kerik, who faced up to 30 years in prison on the most serious charge, to 27–33 months. The judge, who was not bound by the recommendation, set sentencing for February 18. On that date, Kerik was sentenced to 48 months in prison;[49] he was also ordered to pay restitution of nearly $188,000.[50]

Kerik is currently serving his sentence at a minimum security prison camp located at the Federal Correctional Institution, Cumberland in Maryland and is scheduled for release on October 15, 2013.[51]”

Mayor Rudolph Giuliani is the godfather to Kerik’s children:

Much of the photographic “evidence” of jet parts was supplied by Bernie Kerik’s police department; photographs such as this, showing a wheel wedged in an exterior panel are offered as proof of the power of the alleged impact: 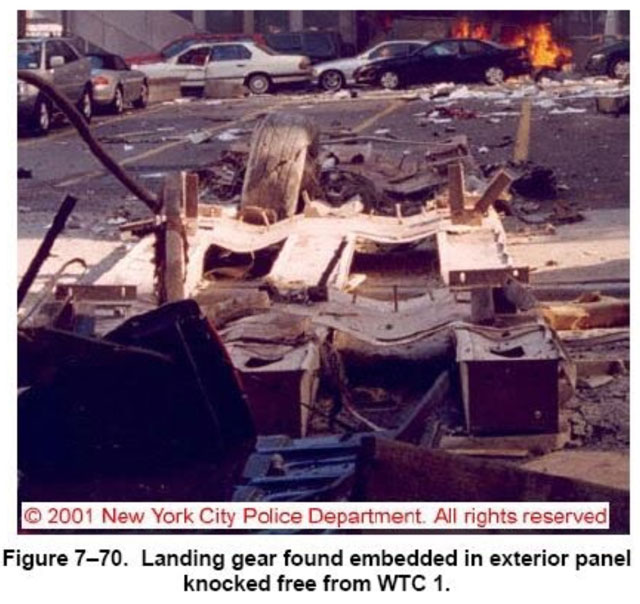 And this one of the alleged engine nestled near a street sign. 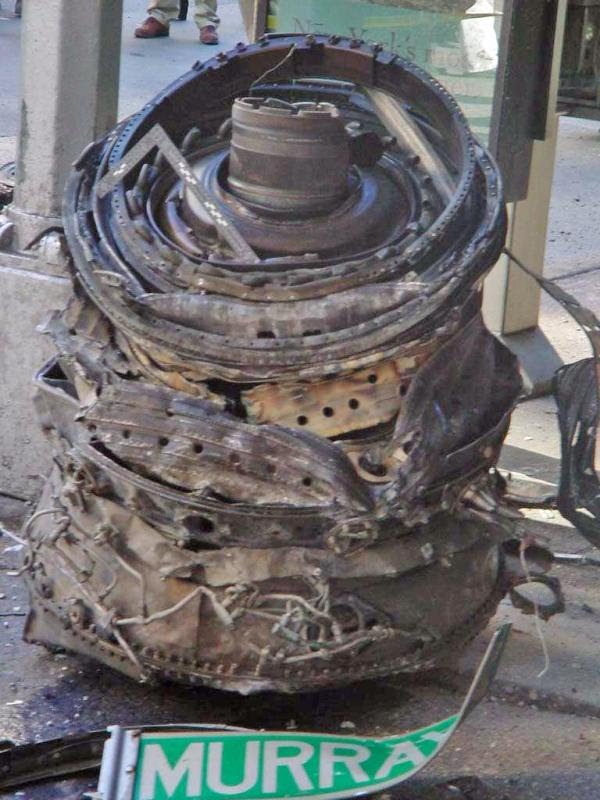 So without the NYPD, we would have very few photographs of plane parts, and without the FDNY and FEMA we’d have very few stories of “rivers of molten steel”, but here the New York Police Museum gets into the game and offers this display of firearms in concrete that became so hot it turned to “lava” and then re-solidified, encasing some handguns stored in an evidence room in the Customs office in WTC6.

Update: The NY Police Museum “molten concrete” exhibit photos have been scrubbed from the Archives.   http://ia600303.us.archive.org/3/items/NewYorkPoliceMuseumWtcGunsMelted/DSC_7411_color_corrected.png 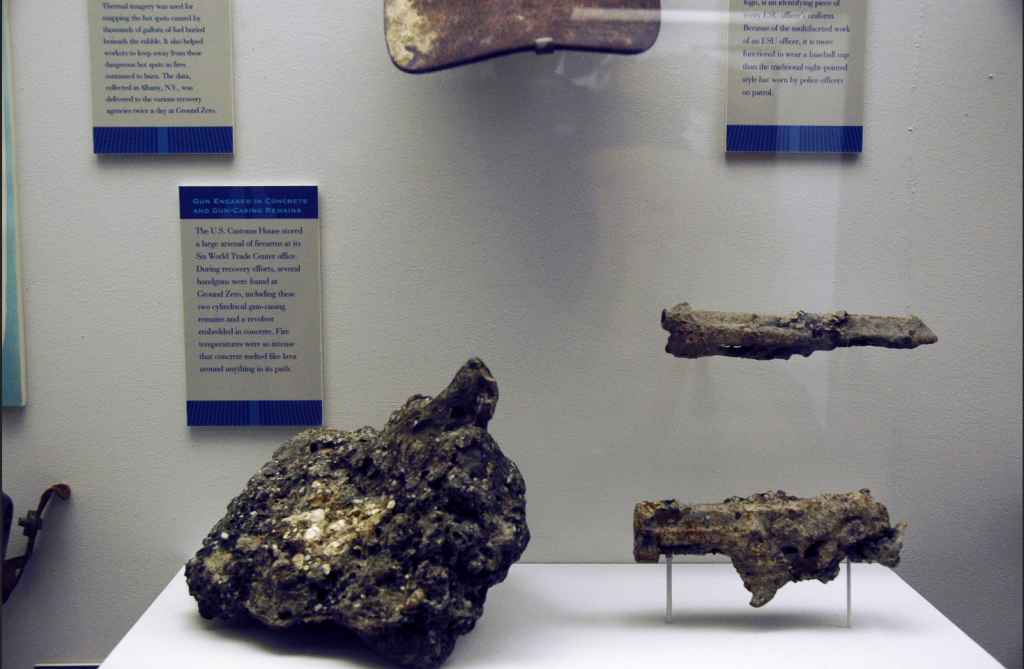 The only problem is, concrete doesn’t melt.  My personal experience with heating concrete tells me that it pops and breaks up as it heats. Because concrete is not “stone” but a mixture of sand and gravel bonded with cement and water, the melting temperatures of the components of concrete must be considered.

Once the moisture is boiled away (breaking up the concrete), the remaining components of sand and gravel would need to melt before the concrete would be considered “lava”. Google searches for the melting point of sand vary, but in general, silicon dioxide (sand) needs to reach at least 1510-1710 C before melting.

“Concrete does not melt, at least not in the way you may be thinking. Concrete is composed largely of gravel an sand, with Portland cement that holds the sand and gravel together into a solid mass. The sand and gravel will melt, but you will not be doing it in your kitchen oven! A temperature of several thousand degrees is needed, and the result will be much the same as the lava that comes out of volcanos. After all, gravel and sand are just rock, as is molten lava. The Portland cement in concrete, is a mixture of various hydrates and silicates of calcium, aluminum and other elements. It too is a “rocky” material that will not melt at any practical temperature, either.”

“So the short answer to your question is that concrete will decompose rather then melt when heated, and the clinker that remains after it cools back down will unmistakably not be concrete.”

A quick evaluation of the images shows the concrete aggregate is still visible, which proves it did not turn to “lava”.  This appears to be simply waterlogged (from firehoses), concrete and gypsum dust mixed with construction slag and then compressed under the building debris, but one thing’s for sure, it ain’t melted and then solidified concrete; you see steel melts at between 1452-1540 C. but the guns didn’t melt.  Had the concrete turned to lava, the guns would have been turned to liquid first, or are we to believe the guns “re-solidified” as well?

Right here is simple proof the police lied, so if they lied about the concrete, what else did they lie about?  Bernie Kerik will be out of the slam next year, perhaps we should ask him.