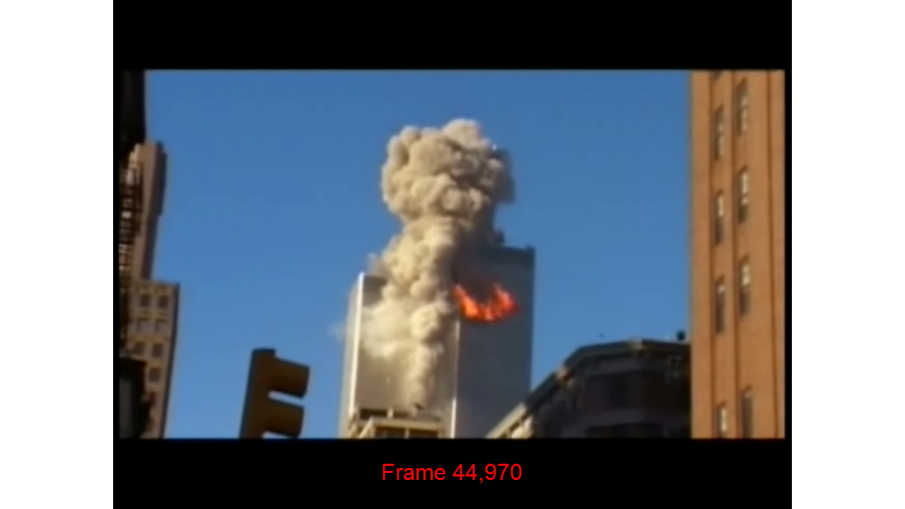 I’ve been meaning to get to this for a while now.

Jules Naudet was using a tripod or dolly when he lined up his shot for the impact of “Flight 11” into the North Tower of the WTC.

These are captured frames from the Filmmakers’ Commemorative DVD Edition of 9/11, released in March, 2002. Jules was positioned with the WTC in the center of his frame well before the first explosion.  This is evidence that he was using a tripod or dolly to capture these scenes.  This is significant because if he was in position with a dolly mounted camera before the explosion, then he was able to capture footage of the undamaged towers from the same position.  Dolly and tripod mounted cameras make video fakery easy.  The whole scene was rehearsed and staged, see below:

Jules and the firefighters show up to investigate a gas leak.  Note the placement of Jules’ camera, with the WTC dead center on the screen.  He had rehearsed the camera motions for the impact sequence. His dolly was fitted with a saved camera position that centered the towers on the screen.  In that way he could spin around and his camera would already be centered on the towers when the shock and awe explosion erupted through the hole cut by the missiles.  Easy as pie for a professional like Jules is.

Actors and extras setting the stage, with the WTC centered behind them:

That awkward moment where you’re waiting for your cue look up in response to an imaginary plane.

Pfeifer is looking at the director.

Jules begins spinning his camera around to its saved position centered on the WTC.

Still spinning. The “plane” is in the frame.

Locked on target, just in time.

Fire erupts through the hole cut in the tower.

Jules begins his exaggerated zooming in, and then zooming out, to imply to the viewer that he was surprised by all of this.

After this frame the screen shakes exactly as it does for me when I remove my video camera from a tripod. Jules then hand-carries the camera and jumps into Pfieffer’s truck to continue with the hoax.

I’ll release a video in support of this sometime after the holidays.

Video: The 9/11 Amateurs Were Using Tripods

Taboo Truths: The Missiles of 9/11