Tools of the Trade: Mark Conlon

Just a quick poke at Judy Wood’s tool, Mark Conlon.  From his post below, he seems to be nursing a grudge.  He won’t take comments on his blog and he is fond of being indignant and of accusing me of lying, so I thought I’d add a little fuel to his fire.

Steve De’ak relies on “video fakery” because without it his “multiple missiles” theory cannot be valid, and the fact we have now “proven” and “exposed” the “video fakery” psy-op over and over again, he does not want to discuss it any longer and has subtly shifted the debate to his “multiple missile” theory which is based on just 9 people’s accounts from the mainstream media reports, which is a “contradictory” position by Steve De’ak as according to him the media where complicit on 9/11, and according to Steve De’ak they produced “fake” videos and live coverage on 9/11? Yet he has no issues “cherry picking” mainstream media accounts as truth regarding missiles hitting the North Tower, while ignoring all the other evidence of eyewitnesses, videographers and photographers accounts, who seen a PLANE. De’ak  would rather make wild accusations against those people calling them liars, and fabricators of their video evidence and being part of a giant conspiracy on 9/11 without a single shred of evidence to support his bizarre theories. “Does “PEOPLE BASHING” come to mind”?

Nope.  Actually Mark it isn’t video fakery that I rely on for my conclusions, it is the evidence at the scene of the crime, evidence that you refuse to address. I guess this is where I should be acting all indignant that you lied!  Gasp!

So the “real” debate which Steve De’ak is avoiding is “video fakery” and it is now clear why, as without “video fakery” De’ak’s “multiple missiles” theory causing the plane shaped holes in the WTC buildings falls apart, which makes it invalid. This explains why he avoids the debate with myself and Conspiracy Cuber regarding “video fakery”, as he has had to publically “retract” certain theories in the past he put-out about the Hezarkhani video, and has now tried to get myself and others into a “false” debate using a “phony-bone of contention” of a “multiple missiles” theory causing of shaped plane holes. Something which I and others will discuss if he can get past his sheer childish rudeness and bad attitude when questions are put to him.

Still nope, see above and stop avoiding the “real” debate which is the lightly bent aluminum cladding followed by the progressively worse-damaged steel columns bent sharply to the right, in a completely different direction than the cartoon plane (or advanced projection technology) was traveling.

I will be addressing several “lies” and inaccuracies told by Steve De’ak about myself, which he learly has knowingly put-out, such as myself “deleting” YouTube comments from his YouTube comments thread. Twice he has told this lie, as he was informed twice about why my comments were removed due to YouTube’s termination of my YouTube channel (I have evidence to prove it).

I couldn’t give a rat’s ass why your comments went missing, and why you think this is important is beyond me.  Sue me if I missed the memo.  You wanna talk “lies?”  Fine!  The videos of flight 175 are all lies, including Hezarkhani’s!  (And I have the evidence to prove it!)

Plus, I will be documenting comprehensively the lies and other distortions he has told regarding comment exchanges between each other. Perhaps an indication why he did not want the “accurate” archive of comments exchanged between us which ‘Conspiracy Cuber’ offered to him which he outright rejected. Perhaps if he had, he might of accurately reported or reflected the true nature of the comments exchanged between us, and maybe reflected truthfully what was said, instead of distorting it to suit his false memory of what was said, where he’d rather play the man and not the ball with personal attacks about me and not the my research or analysis. There will be a full report with evidence demonstrating what has taken place, and the reader can decide for themselves whether or not Steve De’ak was being completely “truthful” and “honest” in what he said about me and his own comments and responses.

Start with documenting the damage evidence and stop being such a pussy.  But before you do that admit you’re the one stretching the truth.  Here’s a screenshot from your blog where you’ve been acting like a Trekkie who just learned Spock’s ears are fake.  Do I really see that you included a link to the long discredited claim that “7D” technology exists?

Unfortunately though, Mark, the truth is not what you’d like it to be, but even if such technology DID exist in 2001, it doesn’t account for the laterally bent steel and the lightly bent cladding that you still refuse to address.   Did you lie or did you make a mistake?  Big kiss! 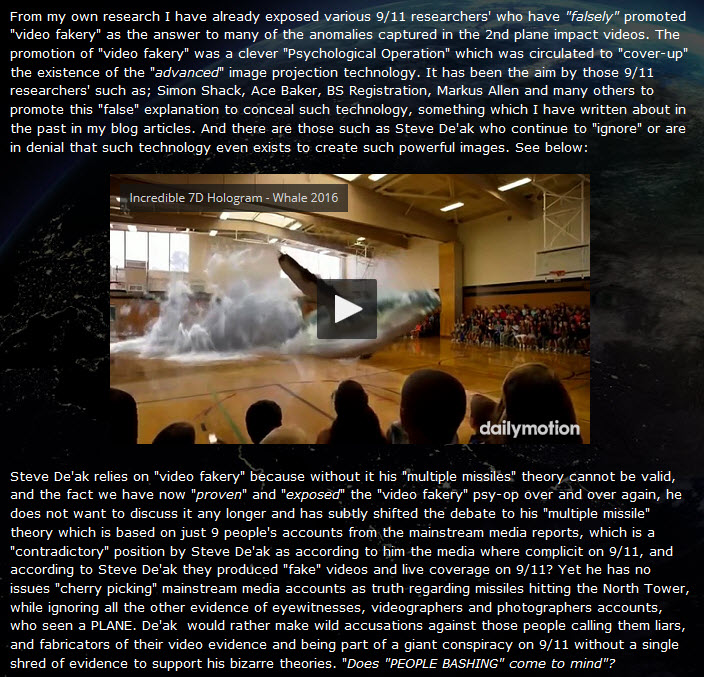 Many are wondering if a video showing a humpback whale hologram jumping through a gymnasium floor as students look on is real.

This is a promotional video for a tech startup that shows what type of technology they want to develop, not what they’re currently able to do.

In other words, a hologram whale didn’t really jump through a gymnasium floor as amazed children looked on — the video was edited to showcase the technology the company, Magic Leap, hopes to develop.

As of October 2015, Magic Leap was in “stealth mode.” The company had attracted high-profile investors like Google and Weta Workshop, the company that did special effects for “Lord of the Rings” and “Avatar.” Still, Magic Leap’s technology has been largely held under wraps, CNET reports:

According to Magic Leap, the graphics you see while using it will look movie-like. It seems as though virtual objects won’t overlap with real-world ones, and they’ll create virtual interactions with real things (like the virtual reflections off a real table). HoloLens also recognizes things around you, such as walls or tables, or your hands: some games blast virtual holes in walls, too, but demos I’ve tried so far have been under extremely locked down conditions. Magic Leap claims these mixed-reality things will appear around you in everyday use, and will seem indistinguishable from reality. That’s something that no one has achieved, and I’d have to see to believe.

Magic Leap released a video that it says was shot directly through its technology without any special effects or editing in October 2015. The video shows what appear to be holograms interacting with the physical world, but it’s nowhere near the size and scale of the humpback whale jumping through a gymnasium floor.

So, this one could be true someday, but it’s fiction for now.

The Puppets Will Meet at Shanksville