Corrected – Evidence that indicates the Naudet lobby scenes were prerecorded.

As can be seen in the image below, the fire truck shown at 1:09 was indeed facing north.   Thanks to my brother for correcting my stupid mistake.  Pfeiffer’s truck is still not visible but I was wrong about the fire truck’s position.  I have pulled the offending video.  My apologies.

The bottom line is that Pfeiffer’s truck was not visible under the awning in the 9/11 pictures (but was there in the Naudet film) which IS an indication that it was filmed on another day. But I was totally wrong in saying that in addition to that clue the firetruck that was captured in the Naudet film was pointing in the wrong direction when compared to the one that was parked in the same location on 9/11. I mistook the two panels in the rear of the truck for reflected windows from the front. So although the Naudets apparently did film their lobby bit in advance, they did park their fire truck in the same position as the ones seen in the images captured on 9/11: 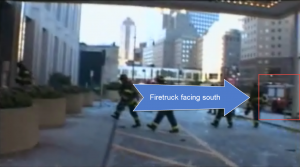 This is just another in a long string of stupid mistakes that I have made since I began researching this stuff. I once even thought the tree in front of the Pentagon was a blast hole from a missile, and said so on JREF. I included images from the MOVIE about Shanksville in my Shanksville missile video not realizing that they were not the real crater. I once thought the windows on the West side of WTC1 were “tiny” and that the whole wall was reconfigured. I once thought the towers turned to dust in mid-air, that the fires were so intense they melted steel and concrete, etc., etc., ad nausea. You name it, I have researched it and often fallen for it but thankfully I am not in this to be “right,” only to find the “truth.” Anyway, thanks Bro.

As can be seen in this short video, there were at least two versions of 9/11 captured on camera. The Naudet video portrayed the official story but a large portion of the photographic evidence from their video doesn’t match up with the videos and photographs captured that morning both before and after the collapse of the WTC.

Obviously if it had happened the way the Naudet video depicts, their video would match the rest of the photographic evidence – but they don’t match which means at least some of their footage was captured in advance. Logically the impact explosions and burning tower footage would need to be captured live, for them to be able to later edit-in a plane, so why not just shoot the whole film on the day, thereby eliminating the possibility of multiple takes screwing up the props?

I can think of only one reason why they needed to film the lobby scenes in advance, and that’s because they wanted to capture the interior before it was demolished, as interiors always are when buildings are demolished. Everything is removed, including non load-bearing floors and walls, anything that can be recycled or that can become a projectile is removed, so they would NEED to capture the lobby scenes in advance, and it seems that this is exactly what happened. This is the conclusion that Judy Wood apparently was deployed to direct her followers away from.

This is why Simon Shack and the “it’s all fake!” crowd have been working so hard do discredit ALL the photographic evidence as fake, because they knew that they left clues that would eventually be discovered. So no, it wasn’t ALL a prerecorded movie, key parts of the movie appear to have been prerecorded but most of it was filmed live as it occurred. That doesn’t mean it wasn’t staged but it definitely means it wasn’t all prerecorded in some sound stage.