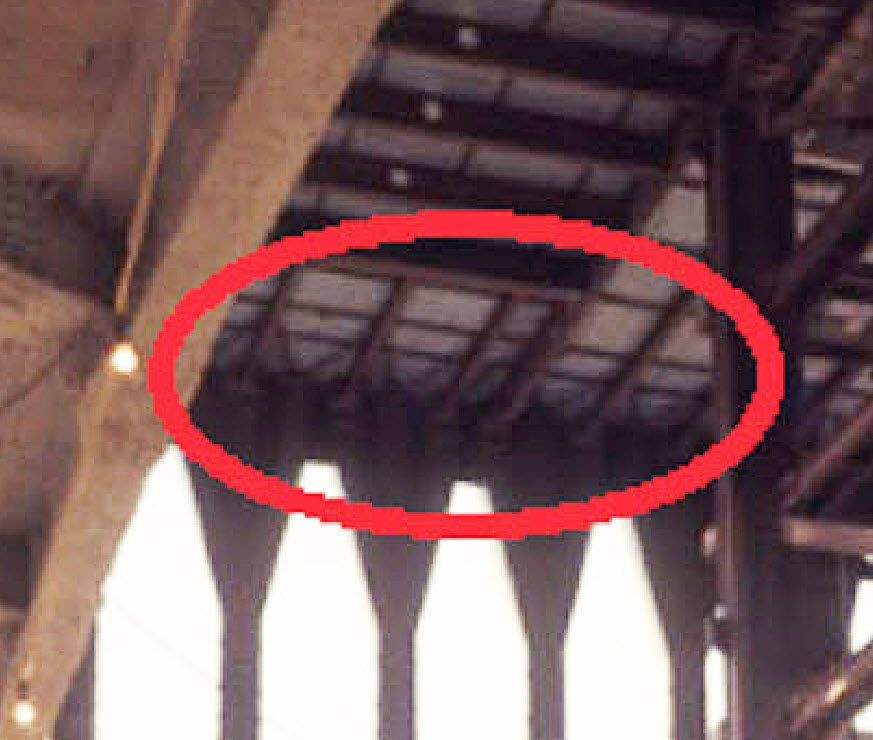 Edit: I refer to the viscoelastic dampers as plastic, but that was a flippant thing to say; they were actually steel with a viscoelastic material included. And to prove I have forgotten more than I can remember, I was also wrong about the truss sizes. The short trusses were 35 feet long, not 40 feet long.

Sometimes I say stupid things and usually I’m hauled onto the carpet for it.  I do just that in this two-hour conversation with Don Fox, Joe Olson and Jim Fetzer, all of whom are big nuke advocates.  What I said that was so stupid was that the viscoelastic dampers were not steel, but plastic (and would therefore have been vaporized by a nuke before the steel,) an easily disproved statement, and one that I know better than to say.  To be honest I have noticed that when I start to feel like a smarty pants, I tend to say dumb stuff.  I hate it when I self-destruct like that, and not just because it is embarrassing as hell and shoots down any credibility I might have had; it is made exponentially worse by Jim’s introduction of me as having spent 10 years researching the towers, a statement that has already resulted in well-deserved ridicule from my critics.  But what really burns my biscuit is I have spent a fair amount of time and energy criticizing the truth movement in general for never correcting their errors, so I can’t even retire in shame or anything; I am forced into righting my wrongs. Again.

One of the people who pointed out my mistakes has been constructing his own models, only his are architecturally accurate, whereas mine are only useful to the layman.  I was humbled by the detail of his work, as well as the knowledge he had of the tower construction as compared to mine, but this very smart man could not explain why the spandrels above the lobby area had no sign of floor material whatsoever, as compared to the lobby ceiling material; instead he would point to the details of the construction, and mock me for even suggesting they were dismantled.  He then explained that the jets were real and that it is ludicrous to think that missiles were launched in broad daylight.  Like Jim, Joe and Don, this guy could not admit that he might be wrong, which is too bad because as the gentleman reminded me,  I should drop my ego and face the facts.  That’s easier said than done, but if I am to be truthful, I have to admit it when I’ve got my head up my ass and my foot in my mouth, which is what I’m doing now.

That said, the evidence has nothing to do with my credibility; I may be completely wrong about all of my conclusions but the evidence that leads me there doesn’t change.  What I would appreciate from the rest of the truth movement is a little reciprocity.  If the truth is the goal then they all need to set aside their egos and admit it when they are in error too.  Had they been doing so all along then surely by now through the process of elimination we could have discarded all those theories that don’t fit, leaving us with the one that does fit.

Below is the updated video with my errors highlighted.  Towards the end of the video Jim Fetzer loses his temper and accuses me of being arrogant, but in my not-so-humble opinion, one man’s ‘arrogant’ is another man’s ‘cocky’.  So goes another episode in the misnamed movement.  Not my best work but it is what it is; the truth as it were.

As an aside, YouTube has been deleting my videos so any new video posts will be on Vimeo.  New link below:

Some of the source photos used in my presentation were screenshots from this video:

This video is to show the lobby from the courtyard, and the decorative spandrels.

Just for perspective when you look at the construction, the lobbby, and the debris: 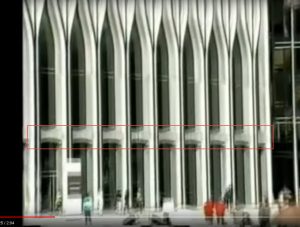 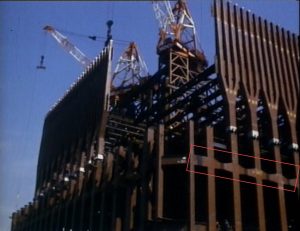 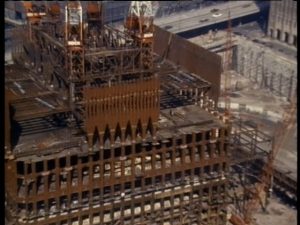 This is a temporary work floor in the lobby.  The significance of this is that adding and removing floors was all part of the construction.  Also note how deep the foundation was compared to the lobby/courtyard level: 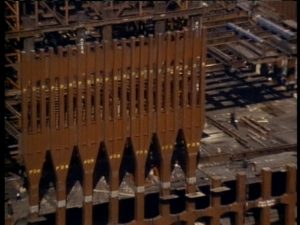 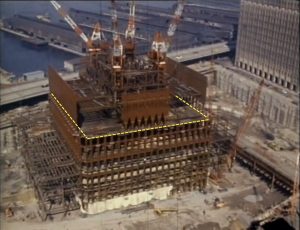 Many truthers, like Joe, think the dust came from the core – but the core columns were not framed for concrete. 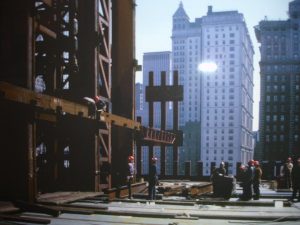 Work platform on top of floor deck.  Bins of materials, planks and fuel. 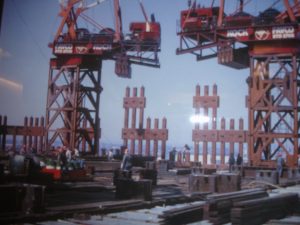 Above the lobby was the mechanical floor: 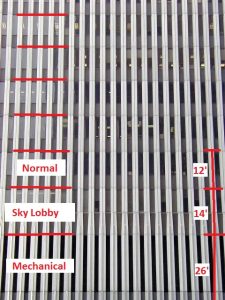 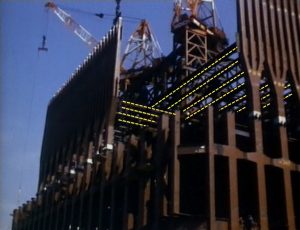 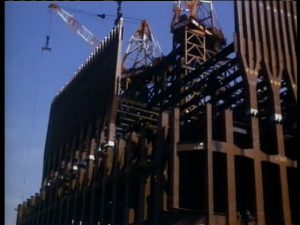 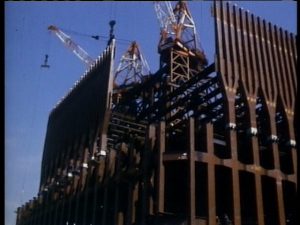 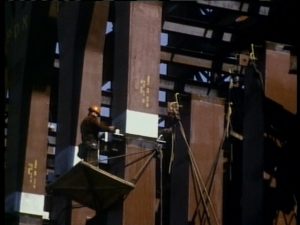 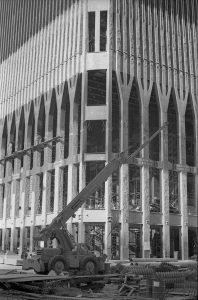 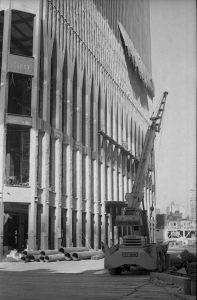 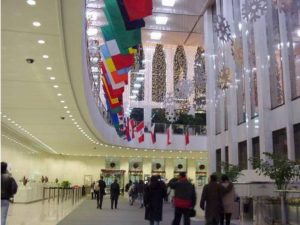 The straps that blow nukes out of the water: 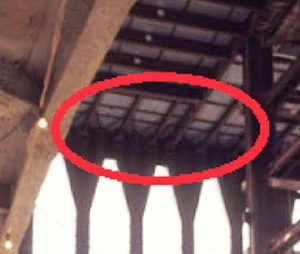 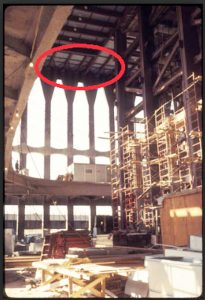 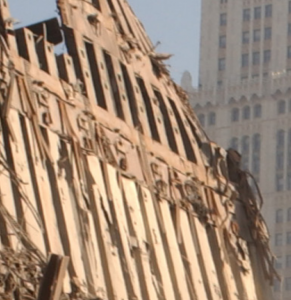 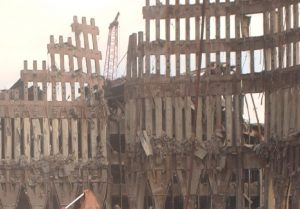 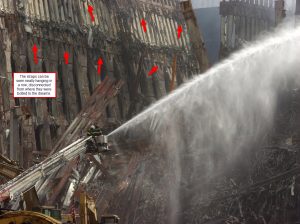 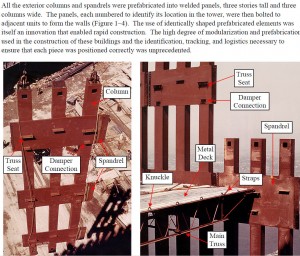 Viscoelastic dampers.  I was wrong to call them plastic.  They were in fact steel with a small amount of viscoelastic material therein. 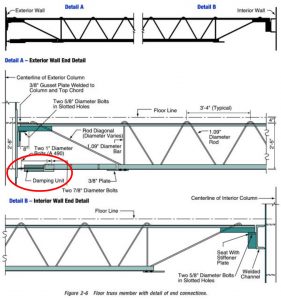 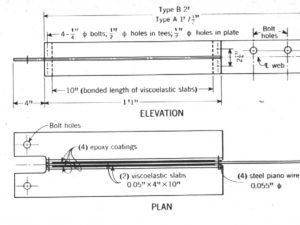 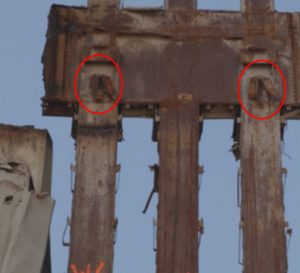 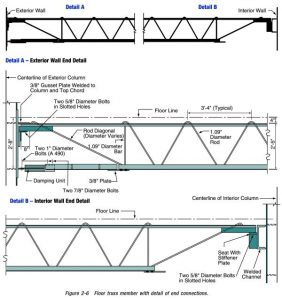 Evidence of where the mechanical level concrete floor met the wall.  The anchoring straps would be below the green arrows.