Calling All Truthers. If Mythbusters Can Do It, Why Can’t We?

Hat-Tip to clarkshark from LetsRoll forums for giving me a new obsession.

Regardless what we saw on the 9/11 T.V. planes cannot slice through steel buildings like that in the real world.  That sort of thing only happens in the Movies, but still the vast majority of the country believes it was real.  They think that if you speed something up to 500 miles per hour it becomes a super weapon, cutting anything in its path.  I once believed it too; I believed the T.V., I never even questioned it; I simply couldn’t imagine such a thing could not be true. 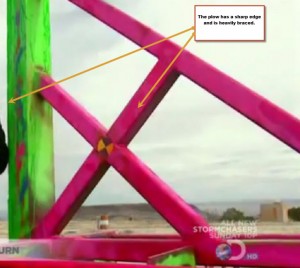 For those of you who are still in that boat, and simply can’t imagine we were shown special effects instead of a real plane crash, take a look at the below video.  In this video they take a rocket-sled with a heavily reinforced “plow” mounted vertically on it and cut a car in half.  Note the construction of the plow; reinforced steel with a sharp edge.  When was the last time you looked at the wing of an aircraft?  Is it built that strong?  Why didn’t they just use a wing for this test?  According to 9/11 a jet wing traveling at 500 MPH sliced through multiple steel box columns without even slowing down, you’d think they’d know that.  They went way overboard with this plow.

I have written to the New Mexico Tech Energetic Materials Research and Testing Center, inquiring as to the cost of a simple test.  I don’t know whether or not they allow me to conduct my own Mythbuster’s investigation, but judging by the flurry of search engine activity they’ve already been very keen to investigate me.  This video was filmed at their facility.

I would like to place a wing tip of a 767 from a scrapyard to be used in the same configuration as the plow in the above video.  I would like to use say the outer 10 or 12 feet of the wing, fill it with water to compensate for the weight of the fuel and collide with a few feet of steel boxes built to the WTC specifications, such as those used in the three-column panel below, except say only a 6-foot chunk of three columns.  Place them (with spandrel plate) on their sides where the Mythbusters folk placed the car and see if the wing tip can cut the 3 columns in half. 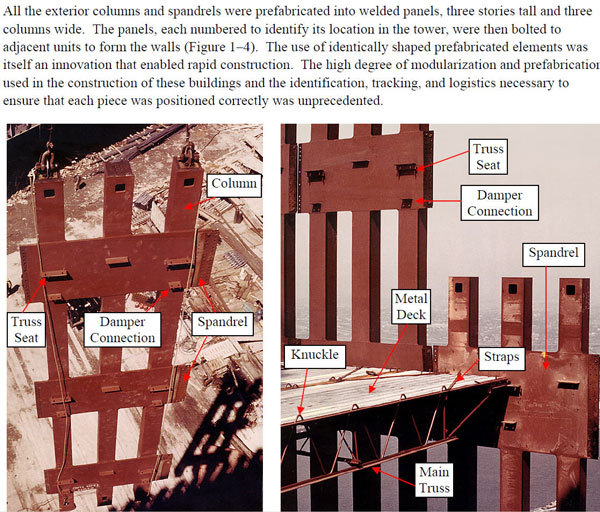 I believe this should clear up the question once and for all whether a plane’s wing tip can sever multiple box columns as easily as the plow cut the car in half.

I would like to do a couple of tests if possible so that there would be no doubt and no complaints from any party involved.

I would like to invite all comers to join in this experiment.  After all, we don’t know what will happen do we?  Perhaps history will repeat itself and the 767 wing section will again slice through the steel columns.  I invite planers and no-planers alike to work together to answer this question once and for all.  Judy Wood,  Jonathan Cole, Morgan Reynolds, James Fetzer, Steven Jones, Simon Shack, AE for 9/11 Truth, even the U.S. government all have a stake in this experiment.  If we are all interested in the truth then let’s prove it once and for all.

911crashtest.org has been reserved for this endeavor.

I emailed the below to Architects and Engineers for 9/11 truth, as well as to the two Scholars for 9/11 Truth sites run by Fetzer and Jones.

I was once an early member of Scholars for 9/11 Truth.  I am reaching out to any and all Truthers for assistance.

I don’t know about you, but I don’t want to be in this 9/11 Truth game for the rest of my life, so I think it’s time we proved for once and for all what really happened.

The New Mexico Tech Energetic Materials Research and Testing Center has a rocket-sled test facility which has been used for such fluff as the “Mythbusters” T.V. show.  I would like to pressure NM Tech to allow a unified group of Truthers to conduct a test similar to the one posted on my blog here:

I am in the process of launching a website for this endeavor at www.911crashtest.org and for funding I’d like to use the Kickstarter program:

I have tried to reach NM Tech but they will not answer my calls or my emails, however they were very keen to investigate me.  They also wasted no time in blocking the embedding of the you-tube video.

This is a no-lose situation for the Truth movement.  The test facility, being a training ground for the military, will in all likelihood decline this test request which will be a victory in itself.  If they would allow Mythbusters to slice a car in half, why wouldn’t they allow a test which could help end some wars?

Just like to add although the test proved at 500mph this could happen the only problem now is how did the Boeing 757 travel that fast at that altitude, as far as I am aware the aluminum tin can would tear itself apart. I saw a YouTube clip where the guy who built the stabilizer and a few others from Boeing admitted it is impossible for that aircraft to travel at that speed at that altitude. Also remember the “Passport” and “Bandanna” from the terrorists that amazingly survived.

Sorry that video is different then the one I said.

Also the plane was not fully fueled and where are the families of the victims of the 4 planes that went down, considering AA and UA did not have those planes registered to them.?

I saw this video and the problem I have with it is he is trying to say that the plane could not travel at the claimed speed at that elevation because it wouldn’t have the power but it wouldn’t need the power if it were gravity that was helping! These planes were practically diving into the buildings and not cruising at that low altitude. I must say the one issue I have that I find difficult to believe is that the aluminum wings were able to sever 14″ steel beams. Aluminum is far weaker and softer than steel, I’d think that the steel would be doing the severing yet I see in video those beams severed and bent inward so I guess I’m wrong. Wish there was some scientist who could answer this.

Well, in the first place aluminum is NOT used in aircraft manufacturing but rather a specially formulated blend of metals that give it a tensile strength comparable to steel itself, with aluminum being only one them. Granted, it is the main component because of it’s light weight but that is neither here nor there.
And neither is the skin if an aircraft as thin as some of these comments seem to convey. At around a 1/4 in thick and applied in sheets of 8 foot or more, essentially what we saw was a quarter in thick hard-as-steel guillotine travelling at 4-500 miles and hour. So if you had simply asked yourselves whether a 1/4 piece of steel travelling at 450 mph can cut through a 3/4 in piece of steel, well…. this website wouldn’t be here because the experiment wouldn’t have needn’t to be performed because the result would have been obvious…..What it was.

So far this project has had the opposite effect. Rather than bring people together, I have lost ground.

Actually, the notion that aluminum is far weaker than structural steel is itself a myth. As you can see from this chart, the UTS of the two metals is very comparable. http://en.wikipedia.org/wiki/Ultimate_tensile_strength

Its the modulus of elasticity that counts – aluminum breaks where steel would bend.

The result is given in advance: It propably will not penetrate steel spandrels of WTC specifications and thus act exactly like the wing tips of Flight 11 and 175 on September 11. 2001.

Most of the kinetic energy (approximately 3600 MJ in total) lies at the center of the plane, NOT the wing tips. This is what you should test.

If you can get 3600 MJ to bounce on spandrels of WTC specifications, you indeed will raise suspicion and shock throughout the scientific world and probably rewrite history.

Furthermore: The 3600 MJ is just the plane and the fuel itself at 240 m/s. It does take the exploding fuel into account. But then again, you want to test with water, so it does not make any difference in this case.

Before you attempt any test, you might want to consider that the panels of WTC only absorbed about 4% of the total kinetic energy from the impact, so there is actually a fair possibility that even your test with the wing tips will result in penetrated steel spandrels. So at best from your perspective: You will have proven nothing new but just confirmed NIST. At worst from your perspective: You will have proven that a simulation leads to a worse result than real life and must conclude that the offcial account is more credible than before your test.

Is that really worth the effort?

Explain how the exploding fuel played a part in the NIST model, please: