The below is an exchange with a person claiming they witnessed a jet do the impossible with their own two eyes.  She even gave a name and a map of her location.  Unfortunately for her she chose the wrong location.  Here’s how you spank a spook:

Who: Myself, obviously. Also my sister.

Where: Battery Park City apartment (visiting my sister who had married a New Yorker and moved there in 1999) with a good view of the towers to the North East and of West Street.

What: I guess you would class this first part as a so-called no-plane witness but I was asleep at the time of the first crash. Something woke me, the sound of the explosion maybe. I saw something out the window and went over for a closer look, seeing debris and paper raining down, flames and smoke shooting from the south side of the North Tower.

My sister had woken at the same time, she had that same feeling of being suddenly wrenched from sleep by a loud noise. We watched in horror as the building burned. It was just a couple minutes later when people started to jump, my brain couldn’t immediately process that those falling shapes were people. The window was open slightly, sirens blaring all around us.

We were so paralyzed by what we were seeing neither of us even thought of turning on a tv. There was a faint smell of something, my sister (a flight attendant) recognized it as jet fuel. We couldn’t see the gaping hole in the North face but it seemed possible a plane had struck the building.

I heard a roaring sound and looked out to try and find the source. A large blue-looking plane streaked by. I also thought I saw a flash of red and being a Brit it made me think of a BA plane’s livery. The plane hit the South Tower within about 3 seconds of seeing it. We evacuated our building right after this.

Why: Not exactly sure what you mean here but why did I see a plane? Because I was looking at it, no mistaking what it was to me even if my initial thought on it’s airline livery was wrong.

Hope this helps, whatever you make of it.

EDIT: I would like to add that although my instinctual thought was British Airways, my sister had no doubt which airline it belonged to. The very same one she worked for, United. She was very sure of this.

What’s with the French names.

I have met many online characters who have claimed they saw the jets enter the buildings with their own eyes. One even claimed he was a fireman evacuating people from WTC7, standing directly below the south tower, looking straight up when 175 hit.

Mostly the tactic is to use some perspective they read about or saw on T.V., and make it sound unique by putting their own personal twist in the story. In the fireman’s case he was obviously using the perspective of a couple other Frenchmen, Jules and Gedeon Naudet, who filmed the first AND second strikes. I don’t know if he was a pro or just disturbed, but his story didn’t add up and sure enough, after enough contradictions were exposed, he finally admitted he hadn’t seen squat.

So you can understand my excitement to meet you. You make my fifth online personality eyewitness! And you even gave me a map and a good description of your experiences, for which I am grateful. Alas it turns out your apartment complex isn’t where you pointed to, but that’s an easy mistake to make so I won’t hold that against you.

You were amazingly close to yet another Frenchman, Luc Courchesne who had set up shop to film the second strike just up the street from where you were. You could have hit him with a spitball, imagine the coincedence! You sure you don’t know him?

Luc’s footage was on the Naudet film “9/11” a full two years before it was released to the public, so I’m assuming you folks with the French names must like to stick together.

Anyhoo, since Luc immortalized the time period you described, and ironically enough, from practically the same perspective, we can see a couple things immediately.

Here we see your location: 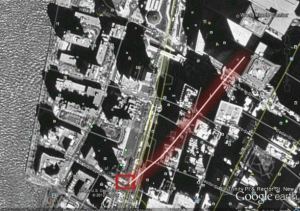 I got the impression you just woke up and got out of bed, but you must have meant you were in the street. No matter though, this is how it looks today: 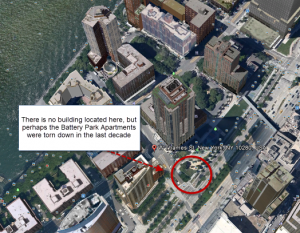 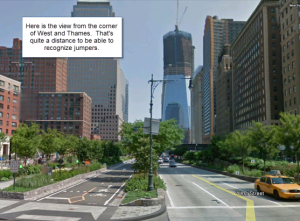 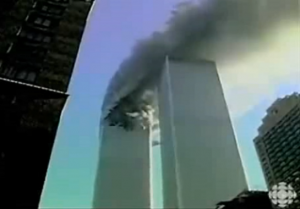 Here’s the closest I could get to the same spot in Google Earth: 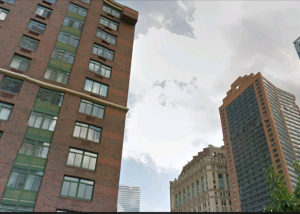 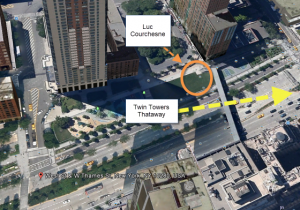 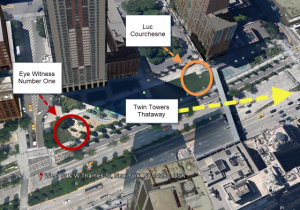 Here’s Luc’s footage, including the second strike.  I have the full length footage too, which includes the audio, but there is no mention of the jumpers; but he was very excited to catch the plane. This footage doesn’t include the sound but as you can see – it was quite some distance, and there were no jumpers.

In conclusion, your description of events uses evocative, emotional language, as propagandists usually do, your perspective mimics that of Luc Courchesne’s, and you were too far away to identify jumpers even if there had been jumpers.

I’m pretty sure you didn’t see a jet fly through a steel skyscraper with your own two eyes.

More images for the JREF nutcases: 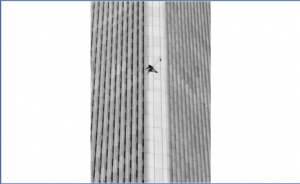 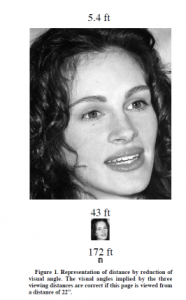 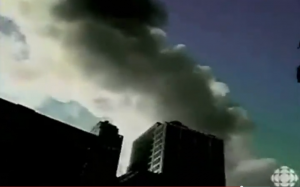 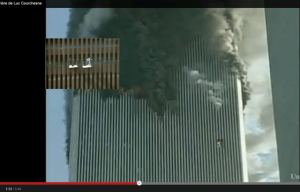 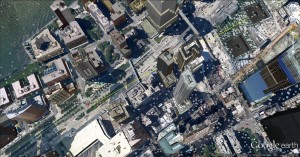 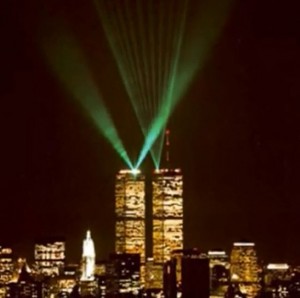 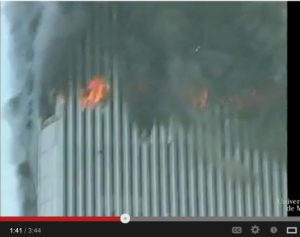 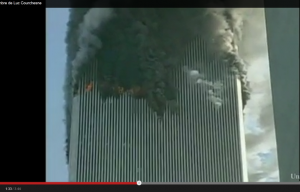 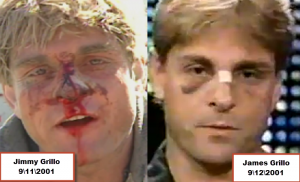 Deliberately twisting things, deliberately ignoring the many responses I made to your blatant distortion, cherry picking and lying. Disgusting

It takes a special kind of psyco to fabricate a sick story like jumpers, all as a way to justify the murder of innocents.

please do the world a favor and kill yourself

Steve,
Didn’t we tell you that Dr. Harrison said if you continued to make things up, you’ll have to go back to the bad place, again? Now, come on a be a good boy and take your pills, okay? Mrs. Taylor’s making lime Jello with the little marshmallows that you like and if you’re good, I’ll get you seconds.

There! That’s a good boy. The pills help you – you know that and that wasn’t so hard, was it?

Hey, I just found where you pulled that exchange from. Why don’t you provide a link to the full discussion over at the Randi Forum?

You seem to doing a heroic effort of defending your made-up stories there. I know I couldn’t keep up lying for as many days and pages as you have. But they do seem to be handing you your butt on a platter, don’t they?

Hi “Big Nurse”, or whatever your name is.

I’ve had worse self-inflicted wounds than the JREF nuthouse can deliver. My mistake about the jumper broadcasts is nothing when compared to lying about seeing non-existent people jumping from 1/3 of a mile away. Mine was a mistake, AnneLIESe’s story is a lie that was used to justify the murder of hundreds of thousands of innocents…not even in the same ballpark.

Is your moniker an oxymoron or what?

wow did you ever get your ass handed to you on the JREF forums. You could not look like a bigger fool.

I can take as well as I give.

You should see the other guy.

At about 4:09 of Luc Courchesne’s video I think maybe I hear him say “Naudet”?

Also is this the side of the N Tower where we “see” the “jumpers” in the other videos? Has anybody synchronized those videos with this one thus providing more proof that the “jumper” videos are fake?

IF IN FACT THERE WERE PEOPLE/BODIES THAT FELL, I DON’T SEE ANY REASON TO SUPPOSE THAT MOST OF THEM WERE BOTH ALIVE & ACTUALLY CHOOSE TO JUMP.

I’ve watched a lot of 911 video multiple times & I’ve never been convinced that there’s any proof that:
1) these people actually jumped (as opposed to being pushed from behind) – IF there were live people up there, there would have been tremendous pressure from those BEHIND the “jumpers” by those who were suffering even more from the heat & smoke & panic. While it’s not easy to imagine people choosing to jump from 1,000 or so feet; it is not hard to imagine those in those super-narrow windows being (accidentally) pushed too far by those behind them. (Similar things happen during mass panicks – people get trampled or pushed too far.)
or
2) That these “people” were alive (as opposed to cadavers previously stashed up there & then “dumped” out.)

In all the “jumper” scenes, I don’t see hardly any movement that one might expect – like wild swinging of the arms, desperate reaching back towards the walls in hopes of grabbing on, praying, etc.. Instead they all seem to be dead/frozen in single positions the entire time in view.

“IF IN FACT THERE WERE PEOPLE/BODIES THAT FELL, I DON’T SEE ANY REASON TO SUPPOSE THAT MOST OF THEM WERE BOTH ALIVE & ACTUALLY CHOOSE TO JUMP.”

When I put myself in their position I recall the times I’ve almost drowned or almost fell off a cliff – I was willing to do ANYTHING to stay alive. Were I trapped in a “towering inferno” I would probably face third degree burns as long as I would live to tell about it. I would cower in a corner hoping against hope that help was just around the corner, and in the event the help never showed, I’d probably die in the fetal position but I would definitely NOT choose certain death by jumping from a 1000 foot window.

Evidence of real jumpers and thousands of witnesses.

These videos are real, not fake: