A Different Take on Shanksville

I was hoping to include Shanksville in the Trump PDF but they nixed it.  This is what I had in mind:

A Different Take on Shanksville

If you have ever had the pleasure of sitting on a jury during a trial you will know that the act of identifying who had the motive, means and opportunity to commit the crime is a necessary step in narrowing-down the list of suspects. Investigating the crime of 9/11 should be no different and although much has been written about the World Trade Center, in my opinion the easiest way to expose who was behind 9/11 is by plucking the low-hanging fruit of Shanksville.

On 9/11 we are told four planes were hijacked.  Osama bin Laden, the alleged mastermind, chose to target the World Trade Center because the Twin Towers were synonymous with American corporate power.  Some people believe that it was more than simple hatred for the Great Satan that motivated bin Laden; that he also resented the Islamic flavor of Architect Minoru Yamasaki’s buildings, so the WTC had to go. [i]

Bin Laden despised the US Military presence in the holy land of Saudi Arabia where they remained after repulsing the Iraqi invasion of Kuwait, so targeting the Pentagon was a natural choice.[ii]

Many people believe the fourth plane, UA Flight 93, was aiming for the White House but it was thanks to the heroism of the civilians aboard that it was forced-down rather than to allow it to reach its target.[iii]  In this context the Shanksville location for the crash was just an accident, which is believable from the perspective of the official story; the passengers on the hijacked flight had heard about the WTC and Pentagon attacks and surmised that like Flights AA 11, UA 175 and AA 77 UA 93 was going to be used as a missile, so they made the decision to fight back.  In the confusion of the onboard struggle the alleged hijackers lost control of the plane, which means it could have gone down anywhere e.g. into a neighborhood, a building or a freeway, but by the grace of God it crashed into an abandoned strip mine in rural Pennsylvania, harming no one on the ground.   If terrorism was the motive, then for the perpetrators the UA 93 hijacking was a failure.

The story of average Americans who fought to the death in defense of America’s capital digs right into our emotions, just like all good propaganda does. It is a compelling tale of extraordinary circumstances where the true grit that makes America great triumphed; a warm and fuzzy narrative that could only have been written by Hollywood.   In my opinion the simple reason Shanksville was necessary was that without Flight 93’s chapter the 9/11 story only depicted corporate and military power under attack, and for folks on the street who have no sympathy for corporations and who think the military can take care of itself there was no guarantee the public would be outraged enough to support a never-ending “War on Terror.”  But by including Flight 93, America itself became the target, and no one messes with Baseball, Mom and Apple Pie without paying the price.  If war was the motive then Shanksville sealed the deal.

A quick examination of the scene of the crime shows two shallow gashes extending at opposite directions from a deeper central crater. Had I never been told that a plane crashed there, I would never have considered such a thing, and in fact some of the first people to the scene made the same observation.[iv]

I grew up as a red-blooded American male which means I was armed to the teeth at a young age, so I recognized in that odd-shaped crater in Shanksville the smoking holes in the ground I used to make as a kid in Alaska where I had relatively easy access to firearms, black powder and explosives some legal and some not.  A quick Internet search for impact craters brought me to the NASA Ames research facility images.[v]  In those photos I immediately noticed something familiar, and I think you will too.  By mirroring them it’s easier to see what I mean (lower left.)  The photo on the lower right is alleged to be the impact crater from a 757, but according to NASA these sorts of gashes are reproducible with projectiles striking at trajectories of less than ten degrees from horizontal. 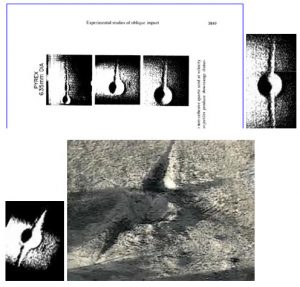 I know from researching every high-speed airplane crash in history that none of the craters at those crashes looked anything like Shanksville and unlike Shanksville all other high-speed crash sites included easily identifiable debris all around the impact crater.   The Shanksville crater was unique as a plane crash, but it’s not so unique when viewed for what NASA says it was, and if NASA is right then it can be reproduced.

I don’t have a rocket sled test center handy, nor do I have a hypervelocity gun, but anyone who has ever seen a hole made by a bullet ricochet should recognize the same gash in those ‘wing’ imprints, and it didn’t take me long to reproduce smaller versions using sling shots, air guns, bullets and fireworks.[vi]  The fact is anyone with two projectiles and an explosive can reproduce the Shanksville crater on a smaller scale anytime they wish. The same shape will be produced regardless of the size of the projectiles. It is easier to produce with the projectile striking in the center and then ricocheting out than it is to produce with the projectile striking from the outside and burrowing into the middle, but it works either way, outside-in or inside-out.  All that’s needed after creating the gashes is to detonate an explosive to create the central crater.  Predictable and reproducible are hallmarks of the scientific method but don’t take my word for it, anyone who doesn’t believe me can try it for themselves (but be careful!)

Being reproducible with bullets and fireworks is one thing, but the Shanksville crater measured somewhere around 120 feet from “wingtip to wingtip” with the central hole measuring about 30 feet wide and 15 feet deep, so to get an idea how big of a projectile we’re talking about, crater sizes produced by bombs depend on the size and depth of the explosive in the ground as well as the soil composition, but in general a bomb containing about 200 lbs of explosives makes a crater of about the same size as that found at Shanksville.[vii]

There are very few weapons that can accomplish it, only cruise missiles from what I can tell.  Although some witness reports matched the government’s story, some witnesses reported hearing and seeing missiles.[viii][ix] Not all of them can be right.

As an example of what could do the deed, the Joint Air to Surface Standoff Missile, or JASSM, is extremely accurate and carries a 900 lb. dense-metal, or dense-metal ballast warhead that measures 12×60 inches.  This warhead is designed for punching through hardened targets such as concrete bunkers with or without detonating therefore the hard, dry, rocky soil of Shanksville would be child’s play, easily accounting for the wing gashes.[x]  240 lbs. of that warhead is explosive so it can also account for the central crater.  The JASSM used off-the-shelf components from other tried-and-true weapons systems and was in production but not in inventory at the time, providing plausible deniability to the military, but here is no question the means to create the gash were there in 2001.[xi] 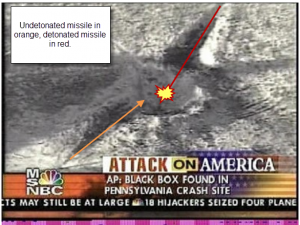 After 9/11 rumors began circulating that the Shanksville gash could be seen in the 1994 USGS photo of the area, but that is a misunderstanding that is easily cleared up by comparing the 1994 photo to the 2001 shots; the gash locations, the sizes, and north-south orientations are different. [xii] Some insist grass can be seen growing in the gash, and many people still believe all it took to produce the crater was for the perpetrators to detonate a bomb in the middle of an old trench, and that they did so to cover-up for shooting down UA 93, or for executing the passengers in a NASA hangar in Cleveland.[xiii]  Other rumors were spread that the Shanksville gash was simply dug-out with heavy equipment into which they dumped scrap metal and garbage, and then dropped a bomb in the middle of that.  Recently I received a message from a local resident who said that he and his neighbors heard heavy equipment in the area the night before 9/11, and they assumed excavators were responsible for the gash, but in my opinion that makes no sense because if the perpetrators were able to create any gash they wished, then surely they wouldn’t have created one that can be reproduced with two projectiles and an explosive.  He may have heard heavy equipment moving about but I doubt they were digging out the trench; it is more likely they were moving-in the supporting cast.  Heavy equipment leaves easily identifiable marks on the ground, which weren’t visible in any of the photos.[xiv]  Furthermore if the gash had been there for years that would only increase the chances that local residents would recognize it and blow the whistle.

All of these rumors only serve to confuse the issue, and none of them can account for the evidence as found at the crash site.  It is said it is easier to fool someone than it is to convince them they have been fooled, and that certainly stands true for Shanksville.  The reason so many false leads were spread, was probably to lower the likelihood of investigators coming to the conclusion that the only way to explain that crater is with multiple cruise missiles.  If that happens all bets are off, because cruise missiles change everything; there are a very limited number of people who had the opportunity to use them.  As far as I can tell there are only three ways to explain it and none of them make the USA look good:

To admit any of the above would be to end the War on Terror and to invite war crimes trials. There is no pretty way to paint this picture and I believe that is why it was so important to the most likely suspects that investigators treat Shanksville as an inconsequential side-show.  The Shanksville crater is proof-positive that if the 9/11 attacks were not perpetrated by the US government/military against the American people, then they are too incompetent to protect America. Furthermore the evidence of missile impacts suggests that the alleged enemy nations are also involved in the cover-up, because if anybody can recognize missile impacts it would be the military minds of those nations that supposedly have every reason for exposing the fraud.

Motive, means and opportunity lead me to the conclusion that if anyone needed proof of the existence of a “New World Order,” look no further than Shanksville, Pennsylvania on September 11, 2001.

Previous Post Who Knew What When? The New York City Cover-Up…
Next Post A message to attendees of the French conference, SEPTEMBER 11, 2001 – DUTY OF MEMORY