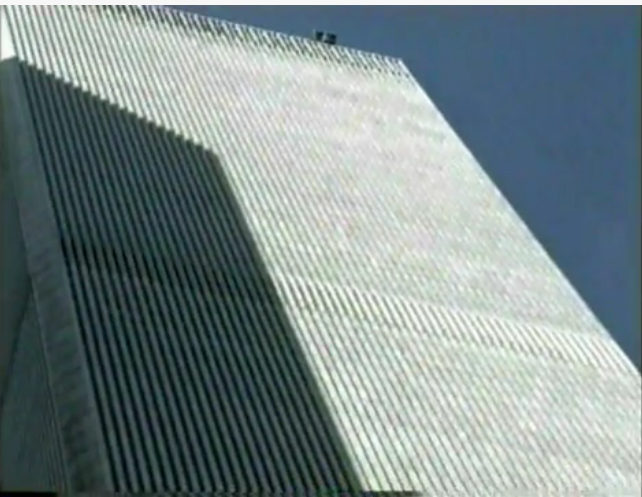 I received the below email from Jeff, the graphic artist working on the animations for my upcoming video clip. I have his permission to reprint this.

Here is one I recorded in 1993, this copy got cut off a little at the end I need to redo it. I had just bought my first video camera. I still have my ticket stubs and the actual brochure from the top of the WTC. I went once in daytime and once at night. I have no video from the top just tons of pictures. I have some video of the inside ground floor and more of the courtyard area and the front of each tower. I had just bought a new camera and wanted to check out the zoom and so I took way more footage than I normally would have.

It’s funny, I bought the video camera in Times Square and took tons of video and then ended up returning it so I had no way to watch the video. Then last year I bought a video camera off Craig’s List that plays Super VHSC so I was able to capture the footage after 16 years. I had not even realized I was standing right next to Bridget Fonda as they were filming “It Could Happen to You” I even recorded a scene that they used in the movie and I was closer to the action than their own camera until they “busted my chops” lol. Then I stood across the street and zoomed in.

I spent 6 weeks in Manhattan as a tourist, no work just play. I rode in a Handsome Cab, ate at Tavern on the Green and Hard Rock and Greenwich Village, SoHo, China Town, toured NBC, NYSE, Radio City, Broadway and Off Broadway shows, Circle Line, Government Island, Ellis Island, Liberty Island, Coney Island, you name it. My brother was working in NYC so I had a free place to stay, two blocks from the WTC at the Marriott (Financial Center).

Also I wanted to tell you my mom was on the way to the top of the WTC in 1993 when it was bombed (the first time). Luckily it was sunny that day so she went to Liberty Island first. Then on the way to the WTC she noticed everyone was walking away from it. No one was walking towards the WTC and a lot of peoples faces were black from breathing in smoke. It had been bombed while she was visiting the Statue of Liberty and she didn’t know. Someone finally stopped her and told her what happened so she went back to her hotel.